There is a continuous increase of synthetic plastic production, leading to an accumulation of plastic waste in aquatic environments. Most plastics do not biodegrade; instead they break down into smaller pieces, which eventually are small enough to be called microplastics. Microplastics can be ingested by aquatic organisms who believe them to be food. Some of the physical impacts of ingestion include laceration, inflammation, and in some cases starvation. There have also been cases of increased mortality, significant impacts on offspring, a reduction in feeding activity, and depletion of energy reserves. When an animal of importance within an ecosystem, whether a predator or prey species, is faced with the consequences of microplastic ingestion, the whole ecosystem may suffer from the decreasing population of that species.

Senior Environmental Science and Biology student, Kendall Wald, has been working in the IC Tox Lab since her sophomore year at IC. She has devoted her time in the lab to analyze fish feeding behavior when encountering microplastics. Over the last couple years, Kendall has focused on which of the five senses is contributing to the misidentification of microplastics as food and if fish are able to use their sense of sight and smell to distinguish their food and microplastics.

Steps in the Process to Success

During her first semester in the lab Kendall was introduced to an amazing piece of technology called EthoVision XT, which is a video tracking software that analyzes the behavior and movement of animals. Every semester, Kendall has used EthoVision to answer a question about how fish react to microplastics. Individual fish are placed into a tank (aka the arena) with a camera hovering above it for the trials and the camera takes a video from when microplastics are dropped into the tank to when the trial time is complete.

So far, juvenile fathead minnows have been the subjects of the experiments. Two age classes, one-month and three-month were separated and acclimated in their new environment and feeding schedule for two weeks prior to the trials. They were kept in a room at 74°F with a 12-hour light: 12-hour dark cycle and fed twice a day.

For her studies, the EthoVision setup involves splitting the arena into three zones: a food zone and a microbead zone on either side of the tank and a neutral zone in the center. During 90 second trials, the EthoVision calculates how much time the subject spends in each zone, how fast the subject is moving, and how many times the subject moves between the zones. 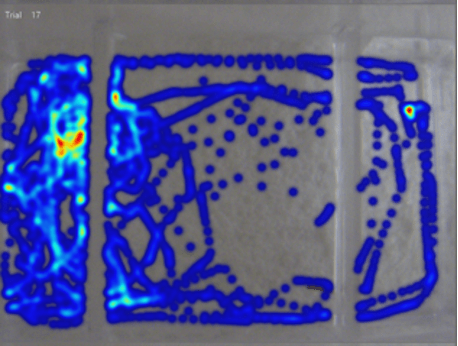 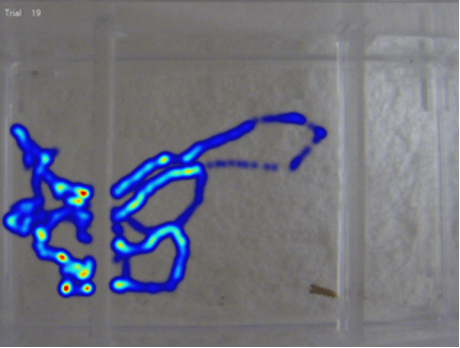 Using the measurements EthoVision took while live tracking, heatmaps were created to show each subject’s path during the trials and where they spent the most time.

Her upcoming project consists of using the same method of testing; however, it’ll now be done with goldfish and zebrafish to see if they demonstrate the same pattern. 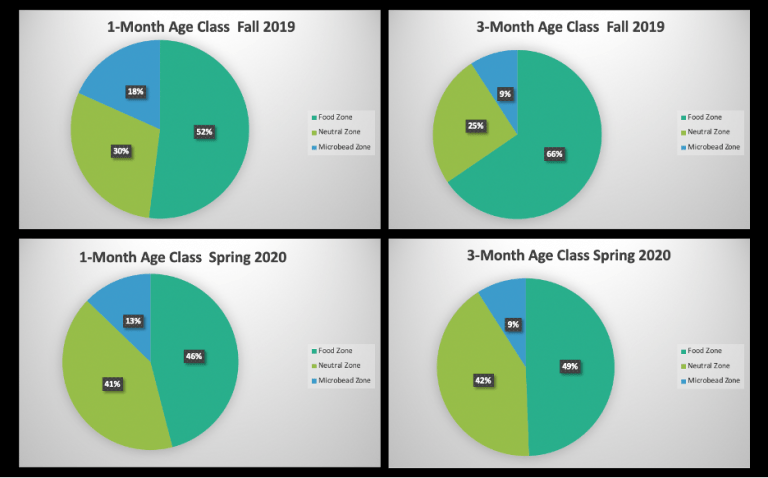 If there is a strong positive correlation with a fish’s sense of smell and their ability to differentiate between microplastics and food, it would support the hypothesis that a fish’s sense of smell is the determining factor of how well fish can distinguish microplastics from food. If the older age classes are all found to have a stronger ability of differentiating the two materials, the study will identify the greatest impact microplastics have on fish is at the larval and juvenile stages of life. This is because the younger age classes are more vulnerable in terms of ingesting microplastics by mistaking them as food. This study could also explain why there is a difference in fish species when it comes to ingesting microplastics, because Kendall has found the magnitude of difference in their sense of smell with background research.